The year was 1922. Times were hard in Germany, and Felix Schlosser was looking for a better life. He had been learning the butcher trade and the meat-packing industry in his native land, and he already had family in Arkansas. Some of his relatives had been in America since 1889 and were well-established. So in 1922, he made the decision to immigrate to Little Rock. Felix first found employment with Little Rock Packing Company and later with Becker Packing Company. After a time, he moved to Conway where he stayed until 1926, at which time he moved to Morrilton, where he made his permanent home near his widowed cousin, Mary Ruff.

In Morrilton, Felix and a partner named Ellis Bentley opened a small retail meat market. After two years as partners, Ellis sold his share of the business to Felix. Soon after, a fire destroyed the small market, but Felix was not deterred. He rebuilt the market, and on July 7, 1928, he reopened the business under the name Morrilton Meat Market and Sausage Factory. It was around this time that Mary's two sons, Edward and Lonnie, who were 12 and 10 years old at the time, began working in the business. On bicycles, they made home deliveries after school and on weekends.

Ed came on board full-time in 1930, just in time to witness one of the company's most important changes. It was then that the company added its wholesale line and adopted the name Morrilton Packing Company. By the time Lonnie followed his brother into full-time employment in 1932, the company had also begun using the Petit Jean brand name. Morrilton Packing maintained both a wholesale operation and a retail market until 1943, at which time the plant was remodeled and the retail market was closed.

The Great Depression era was difficult for everyone in America, but Morrilton Packing was fortunate to have received government contracts in 1934 and 1935 to butcher cattle through the Emergency Relief Administration. The federal government purchased starving cattle in drought-stricken Western states and shipped them to various slaughterhouses by rail. Morrilton Packing received $1 per head plus the hide and offal to butcher these cattle and chill the carcasses. The government also operated a boning and canning facility next door where meat was canned and distributed to needy families through the welfare system. In those two years, the company processed a total of 15,000 head of cattle.

The decade of the 1940s brought many challenges to the company. World War II took most of the able-bodied men, so the work, which was often too heavy for most women, was done by men who would have normally been thought too old. Then, after the war was over, in 1946, the company faced another great challenge: fire brought complete destruction to the company facilities. In those days, burning logs were used to smoke the meat, and periodically, grease would drip onto the fire below and cause ignition. If the smokehouse doors were opened during one of these flame-ups, a major fire could erupt. And that is what happened. But just as before, the company was not deterred. Rebuilding was completed in seven months, and the company reopened for business the day after Thanksgiving in 1946.

As the company grew and progressed through the 1950s and 1960s, Ed and Lonnie became more involved in the management of the business. In 1968, for competitive reasons, they made the decision to stop slaughtering beef cattle and selling dressed beef. This allowed them to focus exclusively on their now-famous pork products.

After Felix's death in 1968, the Ruff brothers managed the company together until Lonnie died in 1979. It was in 1979 that a malfunctioning ammonia valve caused another major fire. It was not a total loss but did require a lot of rebuilding. After Lonnie's death, Ed Ruff assumed the role of CEO. Ed's son, David Ruff, who had worked summers and Christmases with the company since the late ‚ 1950s, came on full-time as Plant Manager in 1984 with the assistance of his semi-retired father. Two years later, David oversaw one of the most important milestones in the company‚Äôs history: the construction of a brand new, ultra-modern manufacturing plant, which was built from January of 1986 through April of 1987. The new 48,000-square-foot facility represented a 75-percent increase in facility size and a major leap forward in productivity. The expansion also allowed the addition of sliced and vacuum-packed luncheon meats and other products in consumer-size packages.

Ed Ruff died in 1990, at which time David Ruff became CEO & President. David oversaw the company until his death in 2018, and now David's son Edward is the President. Today, the company is worlds removed from the small meat market Felix Schlosser began decades ago. Today, and since 1995, the company doesn't even slaughter its own hogs. Instead, it purchases select, fresh pork cuts, trimmed to exacting specifications, from major packers. Today, the smoking process takes place in rooms where temperature and humidity are rigorously controlled. Today, Morrilton Packing sells its meat via the Internet to places as far away as Alaska and Hawaii. Today, Morrilton Packing employs 70 people, and none of them make deliveries by bicycle.

But, on the other hand, so much has remained the same. Morrilton Packing Company is still owned by the same family, and in fact, is the only privately owned processor of red meats left in Arkansas. Even though the smoking process occurs in climate-controlled smokehouses, the bacon and hams are still smoked for 18 hours with real burning hickory, not the liquid smoke used by many other companies. Even though it ships its products across the country, most of its customers still come from 75 miles around Morrilton.

But there is one thing that has never changed. While Felix Schlosser might have never dreamed his company would ever become what it is today, there is one thing he would still recognize immediately were he still with us. And that‚is the taste. We still do things the old-fashioned way, which gives our meats the old-fashioned flavor,‚ said David Ruff. ‚We don‚t use anything but the best quality meats and the best quality ingredients. So if you‚ are looking for a great hot dog, a great ham, a great smoked sausage with great flavor, we‚ have got it. 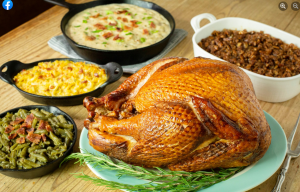 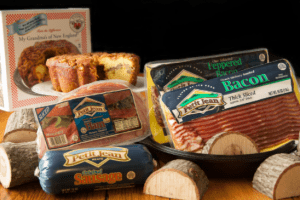 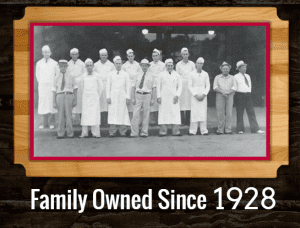 We sell to several grocery stores around the State

We offer handmade, stamped wallets and belts of all sizes!  Customized key chains!